We may earn money or products from the companies mentioned in this post.

Deforestation is one of the consequences of human growth (increase in population) and human development. Now, deforestation plays a critical role in climate change because the Earth’s forests are shrinking in size and allowing more carbon dioxide in the atmosphere causing the planet to warm up. The recent climate change protest in London and David Attenborough’s documentary “Climate Change – The Facts” requires our urgency to change the way we live our lives, a more sustainable way.

The forest most affected by deforestation is the Amazon rainforest, it is currently losing 1.5 acres per second, and experts believe the whole will disappear in 40 years. Today, you will learn why deforestation and the effects it has on the world.

Let’s look at 15 facts about the deforestation of the Amazon Rainforest at this moment in time.

Deforestation of the World Rainforest for BEGINNERS

Before writing about the seriousness of deforestation, let’s inform those who happen to stumble upon the topic with a few basic facts.

Deforestation is the clearing of trees (mostly in tropical areas). There are many reasons for deforestation, but I whittle it down to six main causes:

When Jesus was walking this Earth, the world population was around 250 million people. Today, there’re 7.7 billion people.

With such a large increase, people need space to live and places to go to work.

Humans are very needy when it comes to our diet, we basically want to try everything the planet has to offer. That means clearing forest to grow crops such as palm oil, soybeans, wheat, rice, barley and more.

Oh, I forgot that we are meat eaters as well. A large portion of the population loves their juicy steak.

The timber industry is worth tens, if not hundreds of billions of Dollars each year and we use it for the manufacture of paper, wooden houses, furniture and many more products.

In recent times, the rapid economic development from developing countries, including South American countries contributes to the clearing of forests to build roads and highways to access the depth of the jungle.

Building skyscrapers and homes to meet the growing demand of a rising human population require lots of resources such as copper, tin, zinc, gold, silver, lead and more. Many of these resources are beneath the world’s rainforest.

2). Before Humans, the Earth was Greener

The Earth was once 60% covered by forests (assuming every inch of land and lakes). Now, it covers less than 10%.

In terms of the world’s land area, forests cover 30%.

3). 5 Major rainforests around the world 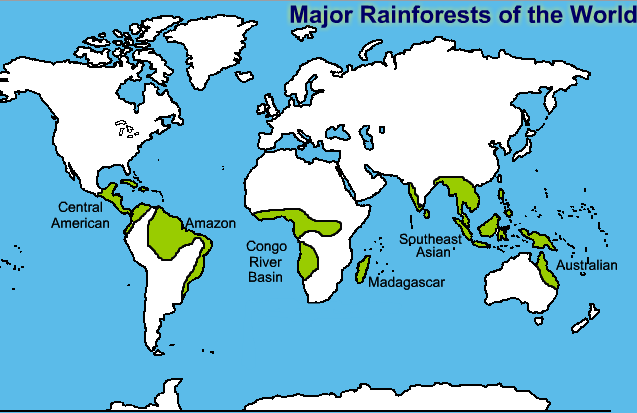 Around the world there are five major rainforests:

The Amazon is by far the largest.

4). Importance of The Amazon Rainforest

The Amazon rainforest stretches over 5,000,000 square kilometres (larger than India and Iran combined) in South America.

It is home to 10% of the Earth’s biodiversity comprising of 400 billion individual trees and pumping 20% of the world’s oxygen supply.

Without oxygen, we cease to exist on this planet.

5). Shrinkage of the Amazon Rainforest

Right now, the Amazon Rainforest lost 17% of its forest.

Deforestation of the Amazon Rainforest

Causes of deforestation in the Amazon rainforest

The timber industry in Brazil, which host 60% of the Amazon rainforest, the fallen trees contribute $22.5 billion per year in 2011.

However, 80% of logging activities in the Amazon is illegal. Companies used forged permits, cutting trees protected by law, cutting more than the authorized quotas and stealing indigenous lands.

You begin to wonder if these laws were made to please environmentalists, but in reality, illegal activities went unpunished.

Cattle farming or ranching is responsible for as much as 80% of deforestation in the Amazon rainforest.

To understand the size and enormity of cattle ranching, Brazil is home to over 232 MILLION cattle, the second largest in the world and supply 25% of beef in the globe.

Who is eating beef?

The United States is the largest importer at 1.37 million tons of beef, followed closely by China at 1.2 million tons. However, this is a little misleading because if you include Hong Kong (a population of 7.5 million), which is the 4th largest importer at 560,000 tons. You could assume half of these imports gets “re-exported” to Mainland China making it the biggest importer of beef.

On the other hand, there is an argument that China has 4.5 times the population of the U.S. meaning beef consumption per capita (per person) is much less the United States. In fact, the average Chinese consume 12.2 pounds per year, compared with the average American on 79 pounds per year. But first place goes to Uruguay at 124.2 pounds per person/year.

The point is we should educate on the effects of eating beef being a major contributor to deforestation of the Amazon rainforest.

Another cause of deforestation on the Amazon’s rainforest is soy production. Since 1990, the growth of soy farms average 14.1 per cent per year and covers 474 square kilometres of jungle deforested since 2008 – an area larger than New Orleans.

The largest importer of soybeans is in China, accounting for 63% of all soybeans import, whereas the biggest soybeans exporter (unsurprisingly) is Brazil.

The amounts of road construction in Brazil is very rapid. New road building data is hard to find, but ten years ago, a group called Regional Environmental Change did a study and found 10,000 miles of new roads were built each year between 2004 and 2007.

Effects of deforestation in the Amazon

We know the causes of the deforestation, but what are the effects it will have on the world. Below are some of the effects we must address, otherwise the world loses its natural balance.

10). Increasing greenhouse gases in the atmosphere

From 1870 to 2014, the cumulative carbon emissions totalled about 545 GtC, known as gigatonne of carbon.

One GtC (Gigatonne of carbon) is equivalent to 1 billion tonnes of carbon.

The level of CO2 in the atmosphere is roughly 45% higher than the pre-industrial days back in 1750. Back then CO2 concentration is around 280 ppm (parts per million). Today, it’s at 411 ppm!

That means there is an extra 173.7 GtC in the Earth’s atmosphere or 174 billion tonnes of carbon!

And by the way, the Amazon Rainforest stores between 90 and 140 billion tonnes of carbon.

Deforestation is reducing the Earth’s ability to capture carbon!

11). People living off the Amazon rainforest

The Amazon Rainforest is home to 34 million people who depend on the forest resources.

Also, you shouldn’t forget that a quarter of Western medicines rely on plants from the Amazon to cure cancer, inflammation, headaches and other known illnesses.

Uplifting trees disrupt the soil on the ground because there are no roots to hold the soil together. When heavy downfall pours, it will wash the soil downstream and into the Atlantic Ocean.

Without trees to hold the soil and the soil to soak up rainfall, this inevitably leads to flooding.

Another effect is the silt entering the lakes and water streams helps to reduce the quality of the water leading to sickness among the indigenous population.

If you cut the trees, you lose the plants below the canopy and with it the discovery of cures for today’s illnesses and future diseases.

Then there is a loss of the way of life for many species is causing mass extinction every day. 137 species are extinct, due to human activity.

Removing trees causes soil erosion and this, in turn, leads to dry and less fertile soils making it harder to grow crops.

Basically, the land isn’t suitable for farming on a sustainable basis.

Deforestation of the Amazon rainforest – the story so far

We read the cause and effect of deforestation in the Amazon rainforest.

Now, let’s see how bad it will get in the future.

In this section, you learn about the future of the Amazon rainforest.

Brazil is the largest country in South America and is responsible for 60% of the Amazon rainforest.

Prior to 1970, the Amazon rainforest covers 4.1 million square kilometres of Brazil or nearly 50% of the country.

Today, it has lost 20% of its size and the forest covers 3.3 million square kilometres.

The Amazon is losing one and one-half acres of rainforest are lost every second. Within 40 years, the Amazon rainforest no longer exists!

My professional background is analysing equities/shares for ordinary people in the UK. Now, I seek a different challenge. One that requires stealthily to find searchable topics that lack REAL CONTENT coverage.

link to Products to beat the Coronavirus boredom

If you are stuck indoors because of the quarantine or looking for things to help your mental state and fitness. You will find these activities challenging, helpful and useful, physically and...

Reduce your chance from contracting viruses by boosting your immune system with Vitamin D We know vitamin D plays a role in maintaining our bones and help boost our immune system. In...

I am a real ninja looking out for the dissatisfaction of internet surfers who can't find immediate information for a specific topic without doing hours and hours of research. I'm here to ease your frustration.

This site is a participant in the Amazon EU Associates Programme, an affiliate advertising programme designed to provide a means for sites to earn advertising fees by advertising and linking to Amazon.co.uk.

One bottle produces 2,270 liters of Aqueous Ozone that kills germs, bacteria, and viruses

Check the latest price on Amazon

See the price on Amazon.

Any cookies that may not be particularly necessary for the website to function and is used specifically to collect user personal data via analytics, ads, other embedded contents are termed as non-necessary cookies. It is mandatory to procure user consent prior to running these cookies on your website.